In this article, I’m going to talk about some of the advanced Chinese punctuation that is of interest to translators and that isn’t covered in Chinese learning resources.

It’s worth remembering the key point about Chinese, which is that Chinese does not have an equivalent of capital letters. In an English sentence like “I called Peter yesterday” it’s obvious that “Peter” is a person, place or thing because it has that capital letter “P”. If it said “I called peter yesterday”, it would be more confusing and require more thought. Capital letters help us understand when we are referring to books, article, or authors. In Chinese, there is no natural way to do that. So there are several solutions for a Chinese writer.

Guillemets are the characters which resemble left or right pointing arrows, that is – « ». I notice that the wikipedia article actually defines them slightly wrongly for the purposes of Chinese. 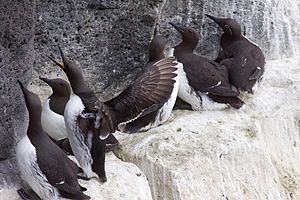 This picture shows Guillemots (courtesy of Wikipedia), which is the most common result when you search in Google for Guillemets!

The best way to translate text within Guillemets is usually just to use English initial capital letters and italics if required for the context. It’s a common mistake for poor translators to replace them with quotation marks. Just because it looks a bit like a quotation mark and the closest equivalent thing would be a quotation mark, doesn’t mean we should translate using quotation marks.

Another feature of Chinese is the lack of spaces. All characters are written one after another, with no spaces, so it’s hard to tell where one word ends the next begins.

Chinese writers tend to avoid that kind of problem by careful selection of words, but one area where it can be problematic is in the transcription of foreign names.  In order to help readers understand that two words should be written and pronounced separately, Chinese writers use the humble middle dot (‧).  Middle dots frequently appear names and places. 喬治·W·布什 (George W Bush).

The easiest way to translate them is to treat them as we would an English space. A common mistake is to feel that you must replace it with a symbol in English and to put an awkward hyphen where you don’t need it.