Translate Thank You to Chinese

Translate thank you to Chinese

How do we translate thank you to Chinese. Actually it’s very easy, but there are a couple of common mistakes learners make. As we get into advanced speech, there are more options for us.

Let’s start by confirming what you mean by “Chinese”

Chinese is the word we use to refer to about 50 languages. These languages include Cantonese, Mandarin, Wu and others. Usually in English when we say “Chinese” we probably mean Mandarin, but, certainly for the UK Chinese community, Chinese can also mean Cantonese.

Broadly, Mandarin is for mainland China, Cantonese for Hong Kong. See my video where I discuss the topic of Chinese dialects in far more detail. In this article I will discuss the translation of thank you into Mandarin. If you are going to Hong Kong I suggest googling how to translate thank you into Cantonese.

Three common ways to translate thank you to Chinese

If someone gives you something, or has given you something and you want to say thanks, the easiest way is to say 谢谢 “xie xie” (watch the video below for more about the pronunciation). 谢 “Xie” on it’s own literally means “to thank” and to say “thank you” we just have to repeat it, 谢谢 “xie xie”. Easy!

Another common way to say is to literally say “many thanks”, which is just 多谢 “duo xie” (多 “duo” means “many”). This is more formal, and more culturally equivalent to “thank you” rather than “thanks”, but there are grammar constraints we will discuss below.

A third common way is to say “I feel thanks” which is 感谢 “gan xie” (感 gan means “to feel” in this context). But this is normally used when you are talking in an even more formal context and again there are grammar constraints.

If in doubt, it’s very unlikely to be wrong to say 谢谢 “xie xie”, it might just be like saying “thanks” at the end of a long speech rather than “thank you”, but that’s not a big deal.

See this video of me explaining the pronunciation and some cultural points.

If we think of 谢谢 “xie xie” as thanks and 多谢 “duo xie” as many thanks, we also need to think about the context. You probably wouldn’t say 多谢 “duo xie” in contexts like someone passing you a napkin or holding a door open. It’s much more common in writing and in slightly more formal occasions like thanking people for attending a business meeting. If you are thanking people for something that just happened (like when you finish a speech) you might want to add the aspect marker 了 “le”. This is a bit like putting -ed on a verb in English, it highlights that you are thanking now for something that has just changed (like you just sat through my speech for example).

So you might start a speech with 多谢 “duoxie” to the audience for attending, and then when you finish an hour later, you might then say 多谢了 “duoxie le” to again thank them for actually sitting through the speech.

Let’s think about 感谢 “gan xie”. I mentioned that 感 “gan” means “to feel” in this context. So if I say 感谢 “gan xie” I’m saying that I feel thankful. It’s quite formal like 多谢 “duo xie” but also it’s rather personal, not as appropriate for a business meeting for example, but maybe a theatre performer at the end of a show might want to express their thanks for listening by saying 感谢 “gan xie”.

If you do say 感谢 “gan xie” remember that the hidden subject is “I”. You are actually saying “I feel thankful”, even though you don’t actually say the word “I”, it’s implied by the grammar. So you wouldn’t say something like “I’m sure my cousin would 感谢 “ganxie” you for attending his wedding today”, but you could say “I 感谢 “ganxie” you for attending my cousin’s wedding today”.

When people give you things like envelopes or business cards, it´s best to take them with two hands and say “xie xie”. Someone from an older generation might also nod their head, almost like a bow, and in some cases people even clasp one fist inside the other hand as they say it, see the picture of Jackie Chan below. 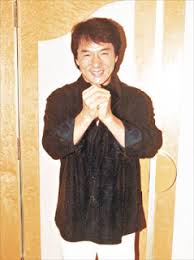 Conclusion – how to translate thank you to Chinese

Well, I hope that helped, gan xie for reading this Article. If you want to learn to count in Chinese, I have written a nice little page on it here.